The Reverend James H. Reid became the second pastor of Israel in the year of 1893 increasing in-depth his work in God's Vineyard. The congregation increased in membership and due to the limited facility, the congregation decided to seek a place of worship which would be more centrally located and provide a better opportunity for serving the community. On July 9, 1897, a factory was purchased from the German-American Insurance Company by the Congregation of Israel Baptist Church.

Shortly thereafter, under the leadership of Reverend James H. Reid, the congregation moved from the 1700 Block of Mullikin Street to the corner of Orleans and Bethel Streets, their new place of worship. The property was secured for the sum of thirty-five hundred dollars. Five hundred dollars payable in equal half yearly installments on the first day of March and September in each and every year. Our wonderful for forefathers, just a few years from being freed from slavery, now purchasing property and paying a sum of money which at that time was equal to being rich in this day and time. They were proud workers in God’s Vineyard. The members who marched from Mullikin Street to the Orleans Street location were: Moses Morris, Cora Hawkins, Cornelia Cunningham, Lizzie Kess, Elixa Reid, George Dickerson, Lula Tyler, Sarah Mills, Nancy Scott, and Mary F. Matthews.

Israel Baptist Church of Baltimore City was incorporated August 16, 1898. Before the subscriber, a Justice of the Peace of the State of Maryland, in and for the City of Baltimore, the following persons appeared to declare their testimony and seal, and to acknowledge the instrument of incorporation to their free and voluntary Act and Deed: Reverend James H. Reid, Elijzh B. Reid, John H. Taylor, Nathaniel Parker and William D. Booker. 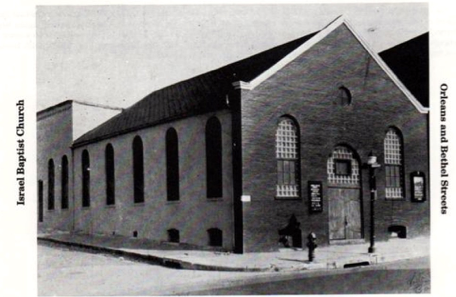 The first phase of the Church’s History ended in the year 1907 with the passing of our founder, organizer, and second Pastor, Reverend James H. Reid. Shortly thereafter, there was some disparity among the members over who should be elected as the new pastor which resulted in a severance of ties. In 1908, a group of members left Israel Baptist Church under the leadership of Deacon and Mrs. Robert Thrower and met in prayer at their home, 1829 E. Orleans Street, until they organized the Wayland Baptist Church in 1909 at 304 N. Ann Street. The other group, the Israel Baptist church, 25 members to be exact, remained working and praying in one accord toward the uplifting of God’s Kingdom and the upbuilding of His Church.

The Historian is cognizant of the questions surrounding the fact as to why our founder, Rev. James H. Reid, is not also noted in our Church History as Israel’s first pastor, but history does not reveal this information. However, a search of Enon Baptist Church records surfaced that Rev. Jones Watkins, first pastor of Israel and Founder and Pastor of Enon Baptist church was married to Eliza Reid Watkins, sister of Rev. James Reid. Thus it is surmised that the founding of Israel, in accordance with written history was by Rev. James Reid with members of his family, and that the family chose one of these people to be the first pastor and that person was Rev. Jones Watkins. (See Church Anniversary Bulletin, with history, dated August 23, 1964). It is noted that the name "Lula Tyler” was inadvertently spelled “Taylor” in history typed in 1983, The correct name is “Tyler”.
(T.R./L.A.G.-Church Clerks) Researched: 1988. Ongoing research of IBC of BC History found in Wayland Baptist Church History by L.A.G.-Asst. Church Clerk, 1991.