During this period of readjustment (1907-1910), the remaining Officials of the Church, being desirous of amending the original plan of Incorporation of said Israel Baptist Church, assembled together on the third day of March A.D. 1909 an agreed to make such Amendment to guide the work of the Church until another Shepherd was appointed and lead to us by God. “The Amendment was officially recorded, March 15, 1909. The Trustees, Chairman and Secretary of said meeting have also herewith to subscribed their names on this 15th day of March, 1909: William G. Reid, Alvo F. Diggs, Hezekiah Brown, Elijah Smith, Curtis Howard. 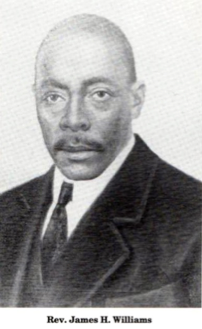 In June 1910, the Reverend James H. Williams (Jim), one of the highly respected and intellectual Black Leaders of that Era was called to pastor the church. Under his expert leadership, the membership again began to grow. He, with the help of God, increased the membership from a mere 25 members to over 400 members; the mortgage was paid off and several Auxiliaries initiated. The Lord with his Shepherd, Rev. Williams, brought Israel from a mighty long way and placed our Church on a solid foundation. 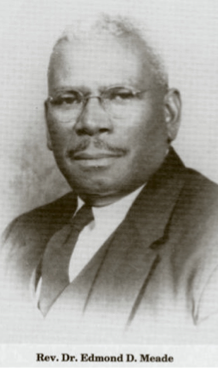 After years of unrelenting service in the Master’s Vineyard and battles with his physical body, Reverend Williams became very ill. He called to his bedside one of his outstanding Sons in the Ministry, Reverend Edmond D. Meade, and asked him to tend his Flock. In march 1937, Reverend James H. Williams, Third Pastor of Israel Baptist Church of Baltimore City passed from this earthly life and the Reverend Edmond D. Meade was unanimously called to take up the work in 1938. Under the leadership of Reverend Edmond D. Meade, the Church continued onward and upward. Many articles of service to the Church were purchased. The building was renovated twice. Thirteen groups were organized, including three singing groups, and the Male and Female ushers. The Moore’s System of raising funds was adopted and proved to be beneficial.

As years passed, the members of Israel saw a need for a bigger and better place of worship. Membership by 1951 had increased tremendously. Another major was the renewal projects ongoing in the city which entailed the Orleans Street Site. Buildings along this corridor were to be demolished and City Housing Projects erected. A special meeting was called by the Pastor, and plans were presented and discussed for purchasing another Church. It was decided by vote to sell, and the Pastor was asked to intercede. Reverend Edmond D. Meade, as a Shepherd led by the Holy Spirit, secured the beautiful Church which we now occupy. 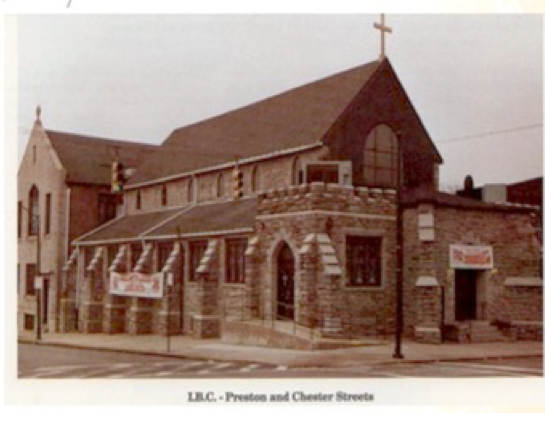 By the continuation of hard work and never ceasing prayer on March 16, 1952, the final settlement was made. On December 14, 1952, the congregation marched to our present location, Preston and Chester Streets. Leading that March and bearing the flags were: Brothers Lawrence McNair and John Wood.

Two years and eight months later, after moving to our present location on August 2, 1955, the mortgage was burned and on December 18, 1955 the cornerstone was laid.

Accomplishments were continuously made under Reverend Meade's capable leadership and after thirty-eight years of unfalteringly guiding the flock at Israel, Reverend Meade with prophetic foresight saw a need to prepare his block for the future. He wanted to ensure that the Church and Congregation he loved so much would experience a smooth transition in its ministry and continue the upbuilding of God’s Kingdom without loss of leadership.